IUI is the process of placing washed and concentrated sperm directly into a woman’s uterus during the time of ovulation. The goal is to get a high number of sperm into the uterus, increasing the chance of sperm finding the egg in the fallopian tube attached to the uterus, which is where fertilization takes place. When successful, the sperm fertilizes a woman’s egg and creates an embryo.

IUI is simpler than in vitro fertilization (IVF), but significantly less effective. Instead of implanting an embryo created outside of the body as in IVF, sperm is inserted into the uterus to fertilize a woman’s egg and create an embryo inside of the body.

IUI is less complex than other forms of artificial insemination, is fairly painless and is offered at a significantly lower cost.

The Real Chance of Getting Pregnant

The question is, “which method (IUI versus IVF) gives me A Real Chance of getting pregnant?

How does IUI work?

To be effective, intrauterine insemination must be performed before or within 24 hours of ovulation, or the egg is no longer fertilizable. The life of an egg is much shorter than the life of the sperm, so there is only a short window of time in which an egg and a sperm can attach and create an embryo. For this reason, it is better for the sperm to be in the uterus early rather than late.

To ensure that this small window of time is met during insemination, a woman’s ovulation is monitored for the weeks leading up to the procedure. This is often done with an at-home ovulation kit or urine tests.

When preparation is complete, the procedure only takes about 15-20 minutes. During the procedure, a catheter containing a vial of prepared sperm is inserted through a woman’s vagina and into her uterus. The prepared sperm sample, usually containing millions of individual sperm, is then released directly into the uterus, where a sperm hopefully attaches to and fertilizes a woman’s egg.

About two weeks after the procedure, a woman can take an at-home pregnancy test to find out if the procedure was successful in creating a pregnancy.

At ARMS, we generally perform intrauterine insemination using a technique called fallopian tube sperm perfusion (FTSP). In this method, a catheter is inserted into the cervix and a balloon is slightly inflated so that fluid will only move forward. Then 3 to 4 milliliters of sperm are injected into the uterus. This technique takes a little longer than a standard intrauterine insemination, but we consider it to be more effective. 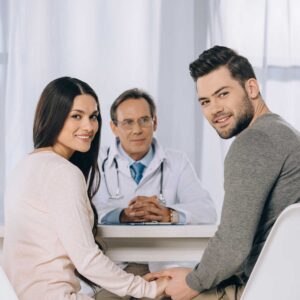 Like many medical conditions, certain fertility treatments target specific contributing factors. IUI is most effective when it is used to compensate for the following conditions.

IUI is often used when male infertility is a contributing factor to a couples’ inability to become pregnant. When a man is infertile, he will undergo a semen analysis to identify the motility, shape and maturity of sperm. Intrauterine insemination is effective in countering male factor infertility because it allows a doctor to select the strongest sperm identified during the semen analysis to be inserted during the procedure.

IUI is often used for women using donor sperm to become pregnant. Sperm donations are typically kept frozen in a lab until the time of insertion.

Due to its low cost and simplicity, IUI is commonly used as a first step for couples when the reason for their infertility is unknown. In this case, it is usually combined with ovulation-inducing medication, which increases the number of eggs a woman releases during ovulation, to promote a better chance of pregnancy. For woman older than 37 or for those who want more than one child, IVF is a better treatment choice.

During ovulation, a woman’s cervix produces mucus that is intended to help sperm travel to the uterus. In some cases, this mucus can become too thick, blocking the sperm’s journey. Women who face this problem can use IUI to become pregnant because sperm is inserted directly into the uterus, bypassing the travel process.

In rare occasions, women can be allergic to the protein in a man’s semen. When semen sensitivity is severe, women can use IUI to get pregnant because proteins are removed from the sperm before it is inserted.