In the history of infertility medicine, one of the most significant breakthroughs was the development in the 1990s of a process called intracytoplasmic sperm injection, or ICSI.

The popularity of ICSI has grown dramatically as a treatment for male infertility. In ICSI, a lab specialist uses a tiny needle under a microscope to inject a single sperm cell directly into a mature egg (oocyte).

ICSI is used in patients who otherwise might have failed fertilization if the standard process of just putting sperm together with eggs is done. 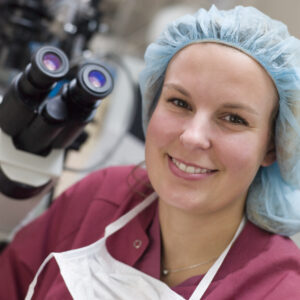 Did you know that male fertility is also affected by age?

ICSI is beneficial for couples with infertility due to severe male factor that may be detected by:

If a preliminary semen analysis indicates that ICSI is a necessary and appropriate treatment, the couple prepares for IVF in the usual way. However, instead of mixing the eggs retrieved from the woman with the man’s sperm in a laboratory dish (as in standard IVF, without ICSI), a laboratory specialist injects a single sperm cell via a special glass needle into an egg cell. Generally, fertilization is successful about two of three times, and the sperm-injected egg begins developing toward embryo stage.

Later, transfer of the resulting embryo usually occurs from three to five days after egg retrieval. Good quality embryos that are not transferred at that time can be cryopreserved, or frozen, for later attempts at pregnancy.

Because ICSI has been used for nearly two decades, there have been studies on the children born as a result, and the findings do not suggest an increase in congenital abnormalities. However, children conceived through IVF with ICSI for reasons of male factor infertility may be more likely to inherit certain genetic conditions that already exist in the man donating sperm for IVF. Also, the ICSI process irreparably damages some eggs.

To help embryos implant in a woman’s uterus and increase the chances of pregnancy success, fertility specialists can use a process called assisted hatching (AH) in conjunction with in vitro fertilization (IVF).

When all goes well during conception, hatching is a natural process that takes place after a sperm fertilizes an egg and creates an embryo. The egg has an outer coating, called the zona pellucida, which holds together the individual cells.

Several days after conception, after the embryo moves from the fallopian tubes to the uterus, the outer zona coating thins, allowing the embryo to break out of the coating and grow larger. This process of hatching is analogous to a chicken hatching out of its egg.

In order to enhance the odds of a successful pregnancy, a fertility specialist may perform assisted hatching in conjunction with IVF.

First, starting on the day of egg retrieval during the IVF process, the female patient receives a combination of steroid medications and antibiotics for six days. Steroids suppress the patient’s immune system so that her uterus will not reject the treated embryos. Antibiotics fend off infection within the uterus.

Next, on the third day after egg retrieval, a lab specialist uses either an acid or a laser to dissolve enough of the zona pellucida so that hatching can occur after transfer to the uterus.

One risk is that AH can increase the possibility of identical twins, known as monozygotic twins. In rare instances, the use of steroids can also result in nausea, insomnia, osteoporosis, elevated blood pressure, salt or water retention, higher susceptibility to infection, mood swings, and allergic reactions. The antibiotic used (usually doxycycline) may increase both skin sensitivity to sun light and the risk of vaginal yeast infection.

However, these latter effects are unusual, and the advantage of assisted hatching is that it can significantly boost the odds of a successful pregnancy, especially when handled by an experienced embryologist. This is particularly true for women older than 35, who generally have lower pregnancy rates.