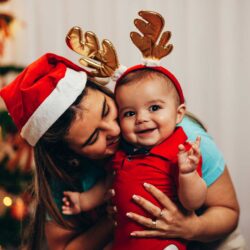 This Christmas season is the 40th anniversary of the birth of Elizabeth Jordan Carr, born December 28, 1981 at 7:46 am. She was the first baby born through IVF in the United States.

The clinic that pioneered IVF in the United States was The Jones Institute for Reproductive Medicine in Norfolk, Virginia, and named after Howard and Georgeanna Seegar Jones. I was blessed with the opportunity of training with Drs. Howard and Georgeanna. They were amazing people. They also had amazing stories about the early days of IVF. What amazes me most are the stories about how they figured things out that we now just take for granted.

My favorite story is how they successfully retrieved the first human egg for IVF.

At that time they did not have the tests that we do and did not know the right time to try to retrieve an egg. They would try to time things based on the woman’s natural signal for ovulation which could happen at any time. This time they thought that it was going to happen in the middle of the night. That night a big snow storm hit and the team was struggling to make it through the storm to the operating room to do the case. Some of them almost did not make it but they persevered that evening and succeeded in finding the egg! Nowadays, we control things so that we can conveniently retrieve the eggs on our time.

Reflections and hope for the future

I think that there is a lesson here. We have so many things that we take for granted. I think that we would appreciate life more if we took a little time, especially at this time of year, to look back and realize all that we do have rather than looking forward at what we think we don’t have.

The other lesson is that things take time. We don’t figure everything out right away and often we progress through lots of little steps rather than a few big ones. Sometimes progress requires that we take a path around a problem rather than through it so we can avoid snow storms that we don’t need to go through if we just do things differently. And sometimes we just have to do the best we can with the information that we have at the time.

The final lesson is to understand what hope is.